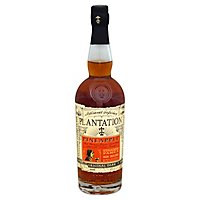 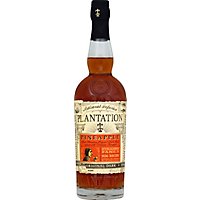 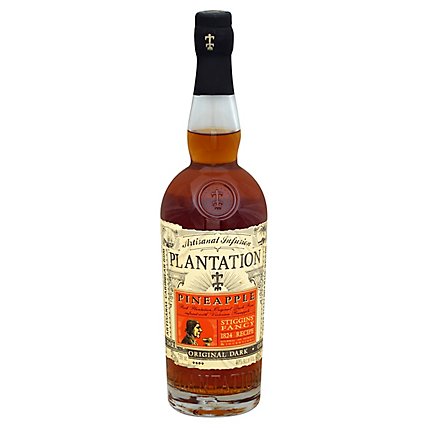 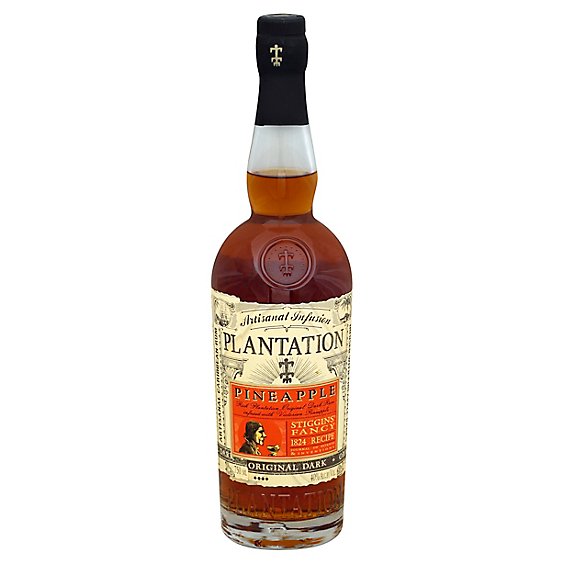 Rich Plantation original dark rum infused with Victorian pineapple. Artisanal Caribbean rum. Infused with pineapple barks. Artisanal infusion. Stiggins' fancy 1824 recipe. Journal of patents & inventions. 1824 pineapple rum. With help from the spirits and cocktail historian David Wondrich, we've tried to revive this forgotten nectar. We relied on several ancient recipes, and added a few traditional techniques from our own bag of tricks. The 1824 English Journal of Patent and Inventions and the 1844 Journal of Agricultural Society were our main sources of inspiration - along, of course, with Mr. Dickens. We infused ripe Queen Victoria pineapples in rich, aged Plantation original dark rum for 3 months. Meanwhile, we macerated, also in rum, the bare rind of the fruit (where the pineapple's essential oil chiefly resides) and then distilled it, creating a bright pineapple essence to blend with the lushness of the infused Plantation rum. Tales of the Cocktail: David and I did this project in part out of sheer curiosity. And also because the pineapple is the symbol of hospitality and of the Tales of the Cocktail Apprentice program (as the 1824 Journal of Patents Inventions notes, it was customary in the West Indies to offer pineapple rum to visiting European friends). Stiggins's Fancy is our liquid thank you to the Tales Apprentices - to you who do so much for us all. We hope you enjoy drinking it as much as we did making it. Following the West Indian tradition, Plantation Pineapple Rum is our gift to you. - A. Gabriel & D. Wondrich. In nineteenth-century England, one of the most prized delicacy was a thing called pineapple rum, a sipping spirit par excellence. Unfortunately, like many good things from the past, it eventually fell out of use and its memory has faded - unless, of course, you're a reader of Charles Dickens' immortal Pickwick Papers, in which it is featured prominently as the favored drink of the esteemed Rev. Stiggins. Well, esteemed is a strong word. It would take a perverse reader indeed to consider Mr. Stiggins as anything but a hypocrite for preaching temperance while largely existing on a diet of free drinks at Mrs. Weller's pub. But it would take a reader just as perverse to deny his connoisseurship in the matter of those drinks. His endorsement of Mrs. Weller's pineapple rum is good enough for us. (The Reverend, by the way, preferred to take his warm [i.e., with a splash of boiling water], with three lumps of sugar to the tumbler). Queen Victoria Pineapples: Before the European arrival in the Americas, the pineapple, an American native, was cultivated by the Guarani people of the Caribbean. The Queen Victoria variety was first introduced in 1668 on Reunion Island; it is considered the best in the world due to its rich, juicy flesh and sweet taste. It works beautifully with rum. www.plantationrum.com. 40% alc by vol. Bottled by C. Ferrand 16130 Ars, France. Product of Trinidad & Tobago.